The M1, released in 1988, is an epoch-making synthesizer that defined the music scene of the late 80’s and the 90s. Its synthesis system with digital multi-effects, based on high-quality PCM, featured a unique sound which was epoch-defining. In addition, as the original music workstation “all-in-one unit”, it came with an 8-track sequencer, drastically changing the composing and production style of musicians everywhere.

The KORG Collection M1 V2 is an upgrade of the M1 software from 2005, and has been refined for modern production environments. We added the much requested high-resolution and scalable interface. The preset sounds include all 3,300 programs, including those from the expansion ROM cards, giving the legendary sounds of the M1 through the latest software as a plug-in. 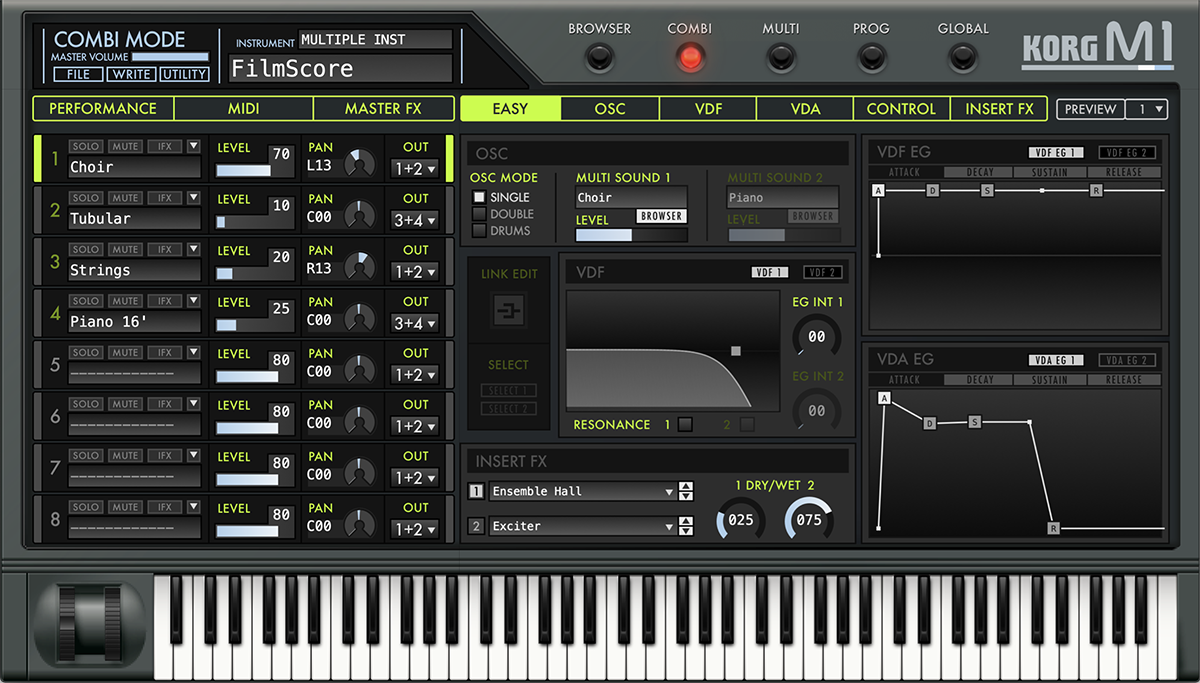 High-resolution interface for Retina and 4K

We have made major GUI refinements to the KORG Legacy Collection DIGITAL EDITION M1 software released in 2005. The high-resolution graphics allow it fit into modern Retina & 4K environments. By supporting six levels of scalability, usability has been drastically improved. Enjoy features that are easy to use and give the satisfaction unique to the M1 and control the many parameters at a high resolution.

A massive collection of over 3,000 preset sounds

Sounds such as the “M1 Piano” and “M1 Organ” are instantly recognizable and have appeared on countless hit records over many years, and yet these are sounds that could only be produced by the M1. Numerous unique M1 sounds were taken up by musicians and producers around the world, and are still in use today. KORG Collection M1 has all of the M1’s preset sounds. In addition to all of the 19 PCM ROM cards originally released for the M1, KORG Collection M1 also covers the sounds of the M1EX that expanded the internal PCM of the M1, as well as the sounds of the KORG T1/T2/T3 synthesizers which we released as an evolution of the M1. It comes with 3,300 preset sounds, as well as the massive collection of the sounds from the 34 ROM cards. When you have vast numbers of preset programs, you might lose yourself trying to find that perfect sound, wasting time that you could be making music. The KORG Collection M1 comes with an easy to use program browser that allows you to filter by musical instrument category and sound character. These two types of tags will lead you to the sound you are looking for instantly.

The EASY mode that gives you instant access to important parameters

The KORG Collection M1 comes with the characteristic vast number of parameters to meet your most specific needs. For when that level of control is a bit too much, the newly designed EASY mode will allow you to shape your sound on a single page. You can quickly access frequently used parameters like oscillator and effect selections, as well as filters and EQ adjustments, so that making rough edits of sounds and minor adjustments of presets is an effortless process. Not content with simply reproducing the original, the new KORG Collection M1 provides further evolutionary developments. Synth parts now have the filter resonance missing from the original M1 as well as VDA modulation. The effect section, originally consisting of only two master effects, have been powered-up to 18 insert effects which include a compressor effect that’s ideal for balancing out the sound. Interoperable with original M1s and iM1 for iPad

Sounds created with KORG Collection M1 maintain compatibility with the original M1. By transferring data via SYS EX (in the system exclusive format) you can make your dreams come true as you play nostalgic sounds through the plug-in, even as your original M1 might be in storage!

Users who already have the plugins from the KORG Collection series can update to version 2 for free. Update now to try the evolved M1 V2.

The KORG Collection M1 V2 is available as a free demo version* that offers all synthesis functions for free as a trial. Get a glimpse of the possibilities before buying.

* KORG ID account is required.
* There is no demo version of the ARP ODYSSEY and LegacyCell.
* The software can only be used for 20 minutes at a time.
* The ability to save edited programs is disabled.

Included in the KORG Collection

M1 V2 is included in the KORG Collection 2 Special Bundle. The Special Bundle is a special package of eight software synthesizers. At once, you will be able to get the famous analog machines that laid the groundwork for the synthesizer as an instrument in the 1970s and early 80s, and the well-known digital machines that changed the history of music in the late 1980s and 90s.